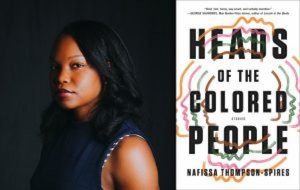 How to survive in America w Damon Young ft. Nafiss...

Presented by City of Asylum @ Alphabet City at Online/Virtual Space

Authors Damon Young and Nafissa Thompson-Spires will discuss the trials and tribulations of putting out their debut works and other topics in this second installment of our new LIVE series “How to survive in America” hosted by Damon Young.

Nafissa Thompson-Spires earned a PhD in English from Vanderbilt University and a Master of Fine Arts in Creative Writing from the University of Illinois. Her work has appeared or is forthcoming in The White Review, Los Angeles Review of Books Quarterly, StoryQuarterly, Lunch Ticket, and The Feminist Wire, among other publications. She is a 2016 participant of the CallalooWriter’s Workshop, a 2017 Tin House workshopee, and a 2017 Sewanee Writer’s Conference Stanley Elkin Scholar. Her short story collection, Heads of the Colored People was longlisted for the National Book Award for Fiction and Kirkus Prize Finalist. The collection is moving, timely, and darkly funny stories examines the concept of black identity in this so-called post-racial era, grappling with black identity and the contemporary middle class in these compelling, boundary-pushing vignettes. Photo Credit: Adrianne Mathiowetz Photography.

Damon Young is writer, critic, humorist, satirist, and professional Black person. He’s a co-founder and editor in chief of VerySmartBrothas — coined “the blackest thing that ever happened to the internet” by The Washington Post — and a columnist for GQ. Damon’s writing — which vacillates from anthropological satire and absurdist racial insights to razor sharp cultural critique and unflinching indictments of privilege and bias — has often generated praise from from his peers. Ava DuVernay called his voice “clear and critical.” Michael Eric Dyson said he’s “one of the most important young voices in humor writing today.” And Kiese Laymon called his work “the best of American twenty-first century writing.” Damon’s debut memoir — What Doesn’t Kill You Makes You Blacker: A Memoir In Essays (Ecco/HarperCollins) —  is a tragicomic exploration of the angsts, anxieties, and absurdities of existing while black in America, and won Barnes & Noble’s 2019 Discover Award. It was also longlisted for the PEN America Diamonstein-Spielvogel Award, nominated for an NAACP Image Award, and is a Krause Essay Prize nominee. NPR, which named it one of the best books of 2019, called it an “outstanding collection of nonfiction.”  Damon currently resides in Pittsburgh’s Northside, with his wife, two children, and his faithful bottles of Nexium and Lisinopril.