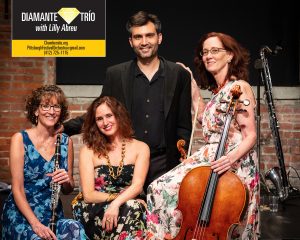 The Diamanté Trio brings the music of South American composers, both pop and classical, to wide and diverse audiences. The Diamante plays different styles within this genre, including tangos, sambas, laments, and choros.

The Diamante Trio formed in 2016 in order to bring the music of South American composers to wide and diverse audiences. They felt that this music, both pop and classical, was not represented on concert stages. The Diamante plays different styles within this genre, including tangos, sambas, laments, and choros. At times the instruments (violin, clarinet and cello) are imitating a street band that you might find in Brazil: the cello acting as guitar. In other pieces they act as a classical string

The Diamante Trio formed in 2016 in order to bring the music of South American composers to wide and diverse audiences. They felt that this music, both pop and classical, was not represented on concert stages. The Diamante plays different styles within this genre, including tangos, sambas, laments, and choros. At times the instruments (violin, clarinet and cello) are imitating a street band that you might find in Brazil: the cello acting as guitar. In other pieces they act as a classical string trio with the clarinet taking the part of viola. The composers whose music they perform represent Argentina,Spain, Brazil, Peru, Mexico, and America. The trio: violin, clarinet and cello, is joined by Brazilian soprano, Lilly Abreu who sings in Spanish, Portuguese and English. In just their short time in existence, The Diamente Trio has performed over twenty times, has been featured on WQED radio twice and has been the recipient of two University of Pittsburgh grants.

BIO-
Lilly Abreu is one of Brazils greatest cultural assets, a versatile artist with numerous appearances as a recitalist and soloist with orchestras and chamber ensembles in France, Spain, Portugal, Argentina, United States and Brazil. Lilly Abreu performed for Brazils First Lady, Ruth Cardoso in Rio de Janeiro. A winner of the Pittsburgh Concert Society and a guest on the Chamber Music Concert Series, she sang the Bachianas Brasileiras #5 with cellists of the Pittsburgh Symphony Orchestra. Ms. Abreu sang Bachs Wedding Cantata with the Culver City Chamber Orchestra in Hollywood and Culver City, California and appeared as a guest soloist in the Strings in the Mountains Festival in Steamboat Springs, Colorado. Ms. Abreu has been on the roster of the Pittsburgh Opera for many years, singing in operas such as Carmen and Turandot. In addition to her classical engagements, Ms. Abreu is also an accomplished popular music artist, performing regularly some of the greatest tunes of the Brazilian repertoire, as well as Broadway and Jazz standards. She has released a CD entitled BRASILEIRA where she performs Brazilian Jazz, and has recently released BOSSA, a CD of Brazilian Popular Songs with the Grammy winner string quartet Cuarteto Latinoamericano.

Devin Arrington, violinist and composer, acted as assistant concertmaster of the Delhi Symphony at age 18 while instructing violin at the Woodstock School in India. He has performed in Russia, India, as well as Carnegie Hall in New York. Mr. Arrington is a successful teacher with students performing as concertmaster in regional youth orchestras. He maintains a large teaching studio in Pittsburgh. He was chosen as a Shinichi Suzuki Teacher Training Scholar in 2010. As composer, he received acclaim from exceptional musicians nationwide, received grants from the American Music Center, Pennsylvania Council on the Arts, and ASCAP. Mr. Arrington plays on a violin made by Joseph Curtain.

Mary Beth Malek has held the Principal Clarinet chair in both the Pittsburgh Opera and Pittsburgh Ballet orchestras since 1990. In addition, she performs with Pittsburgh Festival Opera, Civic Light Opera, Wheeling Symphony, Canton Symphony and as sub with the Pittsburgh Symphony. She is a founding member of the Zaffiro Trio. An operatic highlight was accompanying Luciano Pavarotti in his Civic Arena concert. Mary Beth is on the faculties of the University of Pittsburgh and Chatham University and has a large private studio. She has also taught at Seton Hill University, West Liberty Univ., CMU, and IUP. Mary Beth studied at Northwestern University and at the Eastman School of Music where in addition to a Masters, also received the Performers Certificate award. As a Fulbright Scholar, she studied in Vienna, Austria with the Principal of the Vienna Philharmonic. While in Vienna, Mary Beth toured Italy and Austria with an orchestra and performed recitals, one in the home of the US ambassador. Two summers were spent playing for the Heidelberg Castle Festival in Germany and one summer for the AIMS Festival in Graz, Austria. She has recorded with the Pittsburgh Symphony, the Eastman-Dryden Orchestra, the Eastman Wind Ensemble with Wynton Marsalis.

Cellist, Paula Tuttle, has traveled and performed throughout the US, Europe and the Far East as orchestral musician, soloist and chamber music artist. She played as Principal Cello for the internationally renowned Spoleto Festival in Charleston, SC and the Festival of the Two Worlds in Spoleto, Italy. She presented numerous recitals in France during three summers at the Acadamie Franco-Americaine in Vaison-la-Romaine, Provence. She has been active as soloist and recitalist in Western Pennsylvania, recently performing concertos with Butler Symphony, Edgewood Symphony, I Solisti di Oakland, University of Pittsburgh Symphony and Slippery Rock University Orchestra. A member of the Pittsburgh Opera and Ballet Orchestras, performing as assistant principal as well as principal cello, she also plays solo cello with PBSs MyMusic Orchestra, and recorded and performed with over 100 Rock, Soul and Pop musicians. Paula teaches at the University of Pittsburgh and Carnegie Mellon. Paula is also a founding member of the Zaffiro Trio.

Tickets are $15 adults and $5 children in advance at Brown Paper Tickets. Tickets are $20 for adults and $8 for students at the door. Cash and check preferred. Credit cards accepted with a convenience fee.

Doors open at 7pm. Refreshments available before show and during intermission.

Sunnyhill- The Unitarian Universalist Church of the South Hills

CONNECT WITH Unitarian Universalist Church of the South Hills, "Sunnyhill"