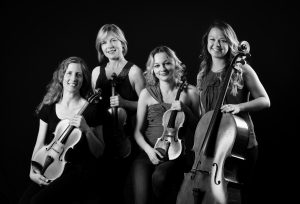 With humane purpose and artistic virtuosity, the Clarion Quartet gives a voice to great composers who have suffered the injustices of suppression and imposed silence.

The Clarion Quartet arose from an idea: to give voice to those whom oppression has silenced. Compositions of genius have been pushed to the margins for political and social reasons, and their creators have had their careers hindered, shortened, and ended entirely in the process. The Clarion Quartet, an ensemble of world-class musicians, provides suppressed composers with a long overdue voice and celebrates their genius through performance, education, and advocacy.

The inspiration to form the

The Clarion Quartet arose from an idea: to give voice to those whom oppression has silenced. Compositions of genius have been pushed to the margins for political and social reasons, and their creators have had their careers hindered, shortened, and ended entirely in the process. The Clarion Quartet, an ensemble of world-class musicians, provides suppressed composers with a long overdue voice and celebrates their genius through performance, education, and advocacy.

The inspiration to form the Clarion Quartet came when Tatjana Chamis, Associate Principal Viola for the Pittsburgh Symphony, was asked to perform a program of chamber music by Jewish composers from the Holocaust. Chamis approached three of her colleagues in the Pittsburgh Symphony: violinists Marta Krechkovsky and Jennifer Orchard, and cellist Bronwyn Banerdt. All four make chamber music a regular part of their artistic activity along with their schedule in the orchestra, and so the prospect of a chamber performance had immediate appeal. Clarion gave its debut performance in Pittsburgh, and the feeling at its conclusion was almost palpable, a spark of wonder that represented a harbinger of something greater.

Both audience members and the musicians of Clarion Quartet experienced a tremendous sense of joy and discovery, but also dismay that such masterpieces were not part of the familiar string quartet repertoire. The musicians concluded that this initial performance could not be just a one-time event, appreciated but then left in the past. The quartet felt a sense of calling to play more more works by these composers and more composers who had similarly been subjected to oppression. At the artistic level, suppressed composers had suffered silence for their creative output, and at the human level, they had suffered physical abuse, the loss of careers, exile, and in many cases execution. So the Clarion Quartet conceived a vision to shine a light on music that has been unduly neglected.

Their next step was to visit the place where many composers created some of their finest works while under the most inhumane conditions, the Nazi concentration camp Theresienstadt. In 2015 the Pittsburgh Symphony was touring Europe, and the members of the Clarion Quartet added a stop during their demanding performance schedule with the orchestra. They visited Theresienstadt (now Terezin in the current Czech Republic), in order to pay homage to the Jewish composers who had been interned there during the Holocaust. Many Jewish musicians and composers had reached prominence and artistic success in the pre-WWII era, but Nazism marginalized their performance and compositions as degenerate music or entartete Musik. The musicians lost performance contracts and academic positions, and their compositions were denied performance or destroyed entirely. Many artists fled into exile, and those who remained were interned in the ghettos and concentration camps of the Holocaust. A large number were sent to Theresienstadt, which the Nazis had presented as a seat of culture but where the reality of life was suffering. The Clarion Quartet entered these grounds and stepped onto the original stage to perform works by composers who had perished during the Holocaust, Erwin Schulhoff and Viktor Ullman, as well as Erich Korngold who left his native Vienna after the Nazi Anschluss to become one of Hollywoods great composers.

The members of Clarion Quartet consider that performance to be among their most fulfilling artistic accomplishments. In a moment their virtuosity intersected with a sense of humane purpose, and at that intersection a mission coalesced for the ensemble. With thanks to an Entrepreneur Grant from the Curtis Institute, the ensemble now turns its sights to a future of bringing suppressed music to new audiences. The four members of the quartet know the landscape of chamber music, having studied and performed the great works of the existing canon. Yet the canon, as it were, still reflects the privileges of social forces and overlooks great but suppressed composers. The Clarion Quartet is currently focused on performance and educational presentations on the music of the Holocaust. In the future the ensemble looks to expand its repertoire and break the silence that has been imposed on other artists, past and present, who have experienced oppression.

The Clarion mission cultivates discovery and opens a door in response to injustice, a door that cannot again be closed. The quartet elevates composers who rise to the same artistic standards but who have been denied an audience to enjoy their brilliance. While all tragedies of oppression cannot be undone, the Clarion Quartet can redress suppression by bringing great works to the audiences of today. Clarion Quartet is dedicated to that purpose and to creative voices silenced by prejudice and intolerance but who will be silent no longer.

The Clarion mission comes at the intersection of two considerations, artistic achievement and the injustices that have suppressed it. Oppression all too often encroaches on artistic expression, and it takes many forms suppressing both the artist and their oeuvre. Artistic excellence represents a core principle both in Clarion programming and performance, and programs rest on ample research, inquiry, and rigorous standards of scrutiny.

The quartets current performance program focuses on Jewish composers impacted by the rise of Nazism and by the horror of the Holocaust. These composers include those whose music and careers were suppressed during the rise of Nazism, those who fled Europe into exile, and those who were interned and killed in the Holocaust. Many Jewish musicians and composers had reached prominence and artistic success in the pre-WWII era, but Nazism marginalized their performance and compositions as degenerate music or entartete Musik. The unfortunate consequence of these forces lingers insofar as their works have not entered the canon of the 20th-century musical repertoire as they would have under normal circumstances.

As the Holocaust progressed composers fates went one of two ways. One path was flight as a refugee or forced exile. Erich Korngold is perhaps the most successful example of a Jewish musician who accepted displacement as his fate with the rise of Nazism. Korngold had been traveling between Vienna and the United States for much of the 1930s, and by the end of the decade he and his family settled permanently in the United States where he had a successful career as a film composer.

For those who remained in Europe, most were soon interned in the camps and ghettos of the Holocaust. In the camps, musicians continued to compose and labored to preserve one anothers musical productivity. The composer Hans Krasa oversaw a ferment of musical creativity at the concentration camp of Theresienstadt. Along with Krasa the music community included Pavel Haas, Gideon Klein, and Viktor Ullmann. Ullman wrote, I emphasize only the fact that in my musical work at Theresienstadt, I have bloomed in musical growth and not felt myself at all inhibited. Indeed Ullman was quite productive during this period in what might be seen as defiance against oppression and affirmation of arts vitality. Tragically, the fate of Ullman like most of those at Theresienstadt ended in their transfer to other camps and subsequent execution. The cruelty of oppression thus exacted its highest price, a life of artistry cut short by injustice.

The Clarion Quartet responds to these injustices through their work today through performance of suppressed works. The current program for performance includes compositions by Erwin Schulhoff, Viktor Ullman, and Erich Korngold. The Clarion mission recognizes that while the tragedies of the Holocaust cannot be undone, those of us in the present can redress one of its cruel legacies, the suppression of great art.

Refreshments for sale before show and during intermission.

Sunnyhill- The Unitarian Universalist Church of the South Hills

CONNECT WITH Unitarian Universalist Church of the South Hills, "Sunnyhill"