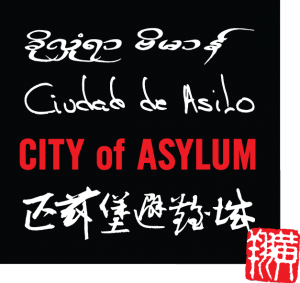 Join City of Asylum for an evening of songs, readings, performances, and more presented by the staff here at Alphabet City.

City of Asylum staff will showcase their personal creativity on Alphabet City’s mainstage at our annual staff showcase. Various COA staff will present their creative work as a way for audiences to get acquainted with the people behind the scenes.

City of Asylum is proud to have such a creative staff whose passion for the arts drives them to succeed, and is excited to provide a platform for free expression!

This event will be hosted by Alexis Jabour and COA volunteer favorite, Blain

City of Asylum staff will showcase their personal creativity on Alphabet City’s mainstage at our annual staff showcase. Various COA staff will present their creative work as a way for audiences to get acquainted with the people behind the scenes.

City of Asylum is proud to have such a creative staff whose passion for the arts drives them to succeed, and is excited to provide a platform for free expression!

This event will be hosted by Alexis Jabour and COA volunteer favorite, Blain Schiff!

Born in Damascus, Syria in 1968 and now living in Pittsburgh via Chicago, Osama Alomar is one of the most well-respected Arabic poets writing today, and a prominent practitioner of the “very short story.” He is the author of Fullblood Arabian in English, and three collections of short stories and a volume of poetry in Arabic. Alomar’s first full-length collection of stories,The Teeth of the Comb, was published by New Directions in April 2017. His short stories have been published in The Paris Review, The New Yorker, Noon, Conjunctions, The Coffin Factory, Electric Literature, and The Literary Review.Currently, Alomar is working on a new novel about the Syrian War tentatively called The Womb, as well as another project called The Book of Meditations about love, hate, democracy, dictatorships, motherhood, freedom, success, and failure among other concepts surrounding the human experience. He is one of the current writers-in-residence at City of Asylum

Tuhin Das is a Bengali poet, activist, political columnist, short story writer and essayist, broadly published in Bangladesh and West Bengal, India. He is the author of eight poetry books in his native language. His full-length, unpublished manuscript Exile Poems focuses on his life as an exiled writer. Das’ work appeared in or is forthcoming from The Logue Project’s Home Language, Words without Borders, The Bare Life Review, and “Where Am i From?” The WAiF project.

Karla Lamb is a multidisciplinary Chicana poet & artist. Her work has appeared in A Women’s Thing Magazine, The Shallow Ends, Coal Hill Review, Vox Populi, Word Riot, Pittsburgh Poetry Review, Uppagus, Rogue Agent, and Voices from the Atticanthology. Lamb earned an MFA from Carlow University, and is currently working on a full-length poetry manuscript. She has edited for After Happy Hour Review, and can usually be found collaborating with various artists and writers. Karla works at City of Asylum a program manager and volunteer/intern coordinator. karlalamb.com

Lucia LoTempio is the author of Hot with the Bad Things (Alice James Books 2020). She hails from Buffalo, NY and left to earn an MFA in poetry at the University of Pittsburgh. You can find her poems in Passages North, The Journal, TYPO, Quarterly West, as part of the Academy of American Poets poem-a-day series, and elsewhere. With Suzannah Russ Spaar, she co-authored the chapbook Undone in Scarlet (Tammy 2019). Lucia still lives and writes in Pittsburgh, and she works at City of Asylum as a program manager. Drop a line at lucialotempio.com.

Rebecca Martin is a poet whose work has appeared or will appear in Original Magazine, Spill: A Queer Arts Magazine, and Pretty Owl Poetry. Originally from Southwest Ohio, she has been studying and producing creative writing since 2008 and graduated from the University of Pittsburgh with a BA from the English Department (poetry track) and Gender, Sexuality, and Women’s Studies Program. Rebecca has read her work at City of Asylum and at the Pitt’s Artist-in-Residency program through the Astronomy & Physics Department, and in July 2019 at White Whale Bookstore for Queers Write Pittsburgh. She works at City of Asylum as program & accessibility coordinator.

Ned Moore is the Event Rentals and Communications Manager at City of Asylum. Outside of COA, Ned is a freelance dramaturg and recently served as Pittsburgh Public Theater’s Artistic Engagement Associate for the ’19/’20 season. His translation of Euripides’ Bakkhai premiered at The Fisher Center for Performing Arts in 2013, directed by Lileana Blain-Cruz. Since then, Ned has received dramaturgy and dramatic criticism fellowships from The Croatian National Theatre, The Eugene O’Neill Theater Center, Tulane University, and Columbia University. He has developed new plays and musicals at Pittsburgh CLO, the Eugene O’Neill Center, The New Group, and New York Theatre Workshop. His critical writing appears in HowlRound, Culturebot and TDF Stages magazines. BA Languages and Literature, Bard College. MFA Dramaturgy, Columbia University.

Khalil Zeigler is a poet and fiction writer. From the corner of 24th and Norris (North Philadelphia, PA), he discovered writing by way of fantasy fiction in high school and graduated from the University of Pittsburgh with a Bachelor’s in English in pursuit of his passion. Khalil writes about escapism, feeling like an outsider in his own community, and hidden magic in everyday life. He works at City of Asylum as program coordinator.

Alexis Jabour is a Duquesne grad who’s been doing miscellaneous theater, radio, and library things in the city since graduating six years ago. Most recently she’s been a regular playwright for the Duquesne Red Masqers 24-hour play festivals. In her spare time she enjoys vlogging, writing, small coffeeshops, and long walks in the park. 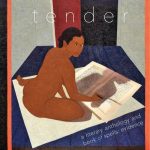 TENDER: A Celebration of Black Womxn & Femmes in Pittsburgh