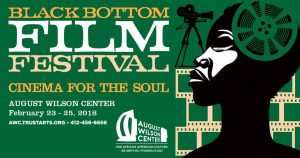 “We’re excited to keep up the tradition of the Black Bottom Film Festival, bringing together community, art, and, action,” says AACC president and CEO Janis Burley Wilson. “This year, the community can continue engagement not just with African-American films but also filmmakers who were pioneers of different realms of the film industry. As part of Black History Month, the festival is a unique way to celebrate the societal influence of African-American contributions to film and society.”

From age-old classics to contemporary work, the second annual Black Bottom Film Festival will illuminate and celebrate African American cinema and unique Black people. The festival will showcase movies that converge on the recurring themes of spirituality, race, family conflict, honor, duty and working-class struggle, themes ever-present in August Wilson’s The Pittsburgh Cycle plays. In particular, the festival will celebrate African-American filmmaking pioneers of recent decades. The BBFF fosters an examination of how Black filmmakers use art to inspire, challenge, confront, and influence American culture.

Double Play, produced by Lisa Cortes (will be in attendance)

The Magnificent Life of Charlie, directed by Bobby Huntley II (will be in attendance)

Last Life, directed by Michael Phillip Edwards (will be in attendance along with Tamika Lamison)

Betty Davis: They Say I’m Different, U.S. Premiere – produced by Native Voice Films (also will screen at Row House and Pittsburgh Filmmakers) directed by Phil Cox (will be in attendance)

Litany for Survival – The Life & Work of Audre Lorde (co-presented with the Kelly Strayhorn Theater), directed by Michelle Parkerson and Ada Gay Griffin

Special events will include (times subject to change):

30-minute Q&A’s will take place before and after several screenings throughout the festival weekend. On Saturday afternoon there will be a presentation by TRUTHSayers series guest April Reign (2:30 p.m.)  and Black Bottom Film Award recipient Wynn Thomas (3:30 p.m.) and a joint Q&A to follow.

The ceremony will be held on Saturday, February 24 at 5:30 p.m. The event will Honor Wynn Thomas for his 30+ years of contributions to the cinematic landscape.

Wynn Thomas has conceived the design for over 10 films with Spike Lee including She’s Gotta Have It, School Daze, Do the Right Thing and Mo’ Better Blues. He’s devised sets for the famed off-Broadway company, The Negro Ensemble Company, and The Public Theatre. Wynn is the first African-American Production Designer in the history of movies. Some of his work includes the Academy Award-winning, A Beautiful Mind, Malcolm X, Inside Man, Mars Attacks, Cinderella Man, Wag the Dog and Get Smart. His most recent movie was the Academy Award-nominated Hidden Figures. Wynn is also the first African American production designer to become a member of the Art Directors Guild in Los Angeles, and the first African American nominated for the Art Directors’ Guild award (for his design work on Tim Burton’s Mars Attacks!) and he is a member of the Academy Motion Picture Arts & Sciences.

April Reign is one of social media’s most influential voices on race, politics, and pop-culture. As the creator of the rallying cry and viral hashtag #OscarsSoWhite, she has challenged the lack of representation of marginalized communities in Hollywood, resulting in the most sweeping changes in the history of the Academy of Motion Picture Arts and Sciences.

The August Wilson Center is a venue dedicated to the presentation of art and culture reflective of African-Americans and the African Diaspora. It is located in Pittsburgh’s Cultural District at 980 Liberty Avenue, Pittsburgh, Pennsylvania 15222. The “Center” offers multiple exhibition galleries, a 472-seat theater for performances, and spaces for classes, lectures and community events. It was designed by African-American architect, Allison Williams.

Tickets are $25 for a one-day pass, and $55 for the entire weekend, and are available online starting January 23 at culturaldistrict.org, by calling 412-456-6666 or at the Box Office at Theater Square.