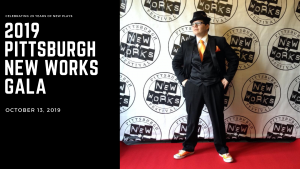 Dinner, Drinks, and the Donnas!

You're invited to the biggest theatre party of the year!  Eat, drink, and celebrate the Pittsburgh New Works Festival! Join the Festival actors, directors, and playwrights as we honor the work done by everyone who brought this Festival's world premiere plays to life!  This year's gala will be held at Cefalo's, a beautiful, historic church re-imagined as an elegant banquet and event center.

You’re invited to the biggest theatre party of the year!  Eat, drink, and celebrate the Pittsburgh New Works Festival! Join the Festival actors, directors, and playwrights as we honor the work done by everyone who brought this Festival’s world premiere plays to life!  This year’s gala will be held at Cefalo’s, a beautiful, historic church re-imagined as an elegant banquet and event center. 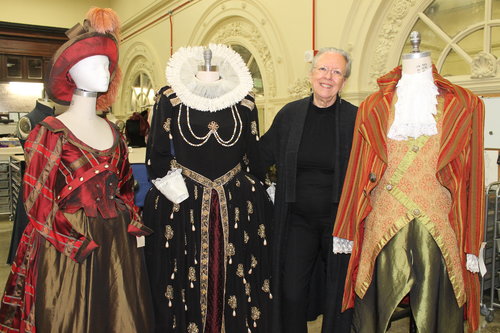 Every year, the Festival recognizes an outstanding individual for their impact and service to the Pittsburgh region’s theatre community.  The 2019 honoree is Joan Markert.

Joan Markert is in her 39th season with the Pittsburgh Playhouse and her 13th at PICT Classic Theatre. She has designed for all 4 Playhouse companies including Uncle Vanya, The School For Scandal, Carousel, Parade, Assassins, Les Liaisons Dangereuses, Anything Goes and The Drowsy Chaperone for the Conservatory Theatre Company; The Gift of the Magi, Kenah –Turtle Island, Yo! Vikings and The Wind In the Willows for Playhouse Junior; Cinderella and Romeo and Juliet for the Conservatory Dance Company; All My Sons, On the Beach, Riddley Walker, Breaker Morant, Peer Gynt and Three Penny Opera for the REP. Her designs and costumes have graced PICT’s productions of The Heiress, The Old Curiosity Shop, Jane Eyre, The Lion in Winter, Sive, The Mask of Moriarty, The Crucifer of Blood, Lady Windermere’s Fan, Blithe Spirit, For the Tree to Drop, Oliver Twist and The School For Scandal. As an Adjunct Faculty member at Point Park University, she teaches Costume History and Costume Construction.

Joan has also worked with various theatres in the Pittsburgh region including the Jewish Theatre of Pittsburgh, South Park Conservatory Theatre, Allegheny Highlands Regional Theatre and Prime Stage. In 1979 she designed costumes for the national tour of Daisy Mayme starring Jean Stapleton and in 1989 she was invited to design The Firebird Suite for the Universal Ballet Company in Seoul, South Korea. Before coming to Pittsburgh Joan spent two years in LA working for Rita Riggs who designed the Norman Lear television sit-coms and for the LA Shakespeare Festival as a Costumer. Previous to that she spent 4 winters as Assistant Costume Designer at the Loretto Hilton Repertory Theatre (now the Repertory Theatre of St. Louis) while acting as Costume Designer during the summers at the Totem Pole Playhouse in Fayetteville, PA. A graduate of Grinnell College and with a Master of Fine Arts degree in Costume Design from Carnegie-Mellon University, Joan has lived in Pittsburgh since 1978. Born in Streator, Illinois, she lived there until leaving 4 days after graduating from high school for the first of three summers working in Yellowstone National Park. In her spare time, she grows orchids, enjoys her cat, sings in her church choir and is working on programs for inventorying and tracking costumes and props.

Tickets are $35 per person.
Cash Bar.  Seating is limited.
Reservations must be made by October 7.  Tickets will not be available at the door.