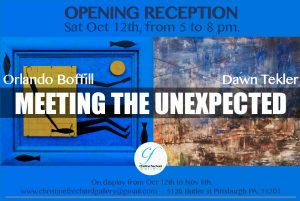 MEETING THE UNEXPECTED Oct 12th 5 to 8

(b. South Bend, Indiana) earned a Bachelor of Fine Arts degree from The Cleveland Institute of Art with a major in Photography and a minor in Video and Film History. Currently resides in Cleveland, Ohio and has a gallery, Dawn Tekler Studio

I am drawn repeatedly to the shores of Lake Erie and the Cuyahoga River to capture both sunrise and sunset from my paddleboard. The combination of rhythmic waves beneath my feet, the meditative flow of paddling and the focus needed to

(b. South Bend, Indiana) earned a Bachelor of Fine Arts degree from The Cleveland Institute of Art with a major in Photography and a minor in Video and Film History. Currently resides in Cleveland, Ohio and has a gallery, Dawn Tekler Studio

I am drawn repeatedly to the shores of Lake Erie and the Cuyahoga River to capture both sunrise and sunset from my paddleboard. The combination of rhythmic waves beneath my feet, the meditative flow of paddling and the focus needed to stay on the board set the tone as I race to see what new colors and shadows the sun might cast on the industrial landscape.

“Mental Structures” aims to convey the self-reflection I experience among the intertwining steel structures, dizzying patterns of wires and the sun and natural surroundings. When painting, I try to contrast the feeling and energy of a sunrise against the strength of the steel bridges and aging factories. At either time of day, there is almost always that one special color that just doesn’t look real. Through layering of encaustic wax (a mixture of bee’s wax, damar resin and pigment), I heat the surface; fusing together the colors. The use of both brushes and putty knives to blend and carve the wax bring out a texture and depth only encaustic wax can provide. The wax extends past the edges of the canvas further reinforcing the deep dimension created by its many layers.

I invite you to not only view the work from your own perspective but to also touch it. Yes, that’s right, you can touch encaustic work as the oils in your fingers will not harm the surface.

was born in Havana, Cuba on October 16, 1964.  In 1980, he enrolled in painting and drawing classes at the Taller de Artes Plasticas under the direction of the painter and sculptor Orestes Vergel and located in the municipality of San Miguel del Padron. At the time, the Taller de Artes Plasticas was located in the Ernest Hemingway Home and Museum. From this experience, the artists’ group called Vigia emerged and Boffill participated with this group in various collective exhibitions.

In 1985, he began his university career working towards a Master’s degree in Art History at the Faculty of Arts and Letters of the University of Havana.  After his graduation, he started to work in 1991 as a Specialist in Plastic Arts at the Galleria de Arte located in Havana’s municipality 10 de Octubre.  During his employment at the gallery, he accomplished important work as curator and cultural promoter.  In 1996, he began to work as an independent artist.

His work has been included in more than 60 collective exhibitions and he has done 13 solo exhibits outside and within Cuba.  In 2010 he worked as scenographic painter on French film filmed in Cuba.  On December 2011, he traveled to Mexico where he did three solo exhibits.  On January 2013, he traveled to New York City invited by   Mora Gallery to participate in the Fountain Art Fair.

Currently, the artist lives and works in the United States.

My current work is largely a continuation of the work that I started to create in Cuba at the end of the 90’s. There are references to the themes of various social, political, cultural, and existential issues of our day from my own experiences as a social being.
They reoccur in my work within symbols that make references to my context of origin and its’ historical circumstances: fish, boats, planes, the island of Cuba as explicit geography, with man always as the subject. Usually it is man in relation to power, and immigration, as a solution to political and economic problems. My work represents truthful and typical characters,in typical circumstances. The paintings are social depictions in a scenery where life occurs and man is exposed to a large variety of existential circumstances.
At this time my work has been inserted into the network of New York galleries, and I am, as a result, experiencing a change in my system of thinking, in the way of understanding the territoriality as a logicaL consequence of interacting with an eclectic culture which has a very urban and cosmopolitan dynamic along with a long tradition of contemporary art