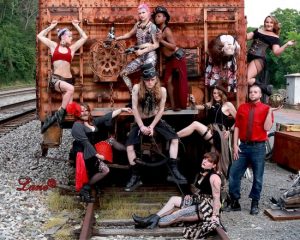 A compelling and unique show for adult audiences featuring Burlesque, Light, and Cirque acts to weave together the beautiful yet sometimes crazy story of love. Love wins!

About the Company:
Ignite Entertainment Variety Show, under the direction of Mr. Geoffrey Steele, is literally setting the tri-state area ablaze. Whether it be performing moving and emotional shows for the Anti-Opioid epidemic, performing their more sensual Burlesque and Variety

About the Company:
Ignite Entertainment Variety Show, under the direction of Mr. Geoffrey Steele, is literally setting the tri-state area ablaze. Whether it be performing moving and emotional shows for the Anti-Opioid epidemic, performing their more sensual Burlesque and Variety Show at nightclubs or their Fire and flow troupe pumping up area music festivals, they’ve proven they’ve got what it takes to stand out as one of West Virginia’s premier performance ensembles to keep your eyes’on.

Their Grand Opening“Fetish Fatale” on June 20th show at Vice Versa in Morgantown was one of the biggest events for the club so far this summer. Their Mistress of Ceremonies, “Petra Von Tease” kept the audience in stitches as she introduced one act after another of amazing performances including aerialists, pole dancers, fire artists, hoopers, dancers, and, of course, Burlesque performers. The night was filled with roaring applause, laughter, glitter, balloons, and streamers, as they celebrated diversity, beauty, breaking stigmas, freedom, beauty, love and light.

August 3rd through the 5th, Ignite Entertainment Variety Show’s Fire ‘N Flow troupe took on one of the greatest music festivals around. The 32nd Annual Jerry Garcia Birthday Bash at Tripps Farm in Terra Alta, WV. As they flowed during the day and then “ignited” the night, it was a truly special and magical night of music, love and light, and of course Fire!

On September 15th, 2018, Ignite Entertainment Variety Show performed for Le Diner En Blanc Pittsburgh 2018 for over 1,200 guests! This event was originated in Paris, France over 30 years ago and is celebrated in various countries and cities. It was truly an honor to provide quality entertainment for such a prestigious part of history.

Following Diner En Blanc, Ignite Variety Show returned to Vice Versa of Morgantown, WV. Their “Back In Black” show was filled with all kinds of colorful fun! The Rainbow Party was on! Revealing from the darkness can only be light, they showed just how much creative talent that was in store to keep the darkness away. Leading all the way up to the Black Parade which become a burst of glittery greatness!

On September 29th (Sept. was a very busy month for this group LOL) the Fire ‘N Flow troup of Ignite Entertainment got their groove on at the 2nd Annual Groovin’ with the Grove. The awesome music and people made this festival one of a kind! For the first time, with three new members to the fire family, seven flow artists lit up the night! From hoops, poi, fire fans and even a little bit of LED, nothing was left to the imagination. It was a night of magical transcendence!

To follow a busy month in September, Ignite had two of the greatest shows of the year, on the same night! On October 19th, this was Ignite Entertainment Variety Show’s OWN event which was held at The Uptown Event Center in Clarksburg, WV. The 6:30pm show was a combination of fan favorite acts from previous shows during the year. The rendition of acts were truly the best of the best. Then came the Halloween Show!! All I have to say is this group knows how to do Halloween! From mentally crazy, spooky, bloody, and creeping in the shadows, this was by far the greatest performance of the year!!

Keeping up with their busy schedule, Ignite then was asked to perform for Buckhannon Pride, on Oct. 27th. So, director Geoffrey Steele rounded up some of the group and made this night another great performance. Not only was there burlesque, hiphop, and some modern dance, the Sanderson sisters made an appearance to sing us some songs. The Fire ‘N Flow troupe ended the night with some firey and blazing moves that mezmorized the crowd.

As it has been an awesome year for Ignite, they had a private party for a close friend that much needed some “psychos” in her life. The “Psycho Circus Spectacular” was nothing for the faint of heart. From amatuer performances, carnival games and even a little bit of a freak show, lead up to the performances of the night. Ignite Entertainment let the freak inside loose to roam the grounds and claim the souls of the lost. They brought the house down with their performances since there were no limits or rules (per request by the guest of honor, the birthday girl). To her response, “It was the best birthday i have ever had!”

Coming to an end of their much successful year, Ignite will be back at Vice Versa on December 8th for the Onsie Party!! Can you figure out what’s up their sleeves for this performance? Well good luck because you never know what to expect coming from this wonderful, creative, multi-talented group of individuals. You’ll just have to come to the show and find out like me!

(If you buy a 2019 Pittsburgh Fringe Button you receive $3 off every show.  You can buy buttons in advance online, or at the venue when you arrive.  You must show the button for each entrance where you purchased a Fringe Button Discount.)

*PLEASE NOTE* : This event is a split venue show, meaning it takes place at BOTH the Irma Freeman Center for Imagination AND the ACE Hotel; please pay attention to your selected ticket time to see which venue you should head to.

*Again PLEASE NOTE* : This event is a split venue show, meaning it takes place at BOTH the Irma Freeman Center for Imagination AND the ACE Hotel; please pay attention to your selected ticket time to see which venue you should head to.

Irma Freeman Center for Imagination AND the Ace Hotel