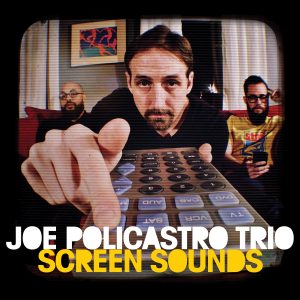 Join us for an evening of jazz with the Joe Policastro Trio celebrating their new album Screen Sounds, a unique take on the music of screen and television.

“The group’s terrific new album, Screen Sounds, applies a diversity of approaches to all kinds of source material, consistently retaining the essence of the original works while boldly imprinting the trio’s personality.” — Chicago Reader

“There are always new wrinkles to be found in the familiar.  That’s a political stance that seems to serve the Joe Policastro Trio well…putting alternately gritty and focused touches on songs we’ve come to love….Policastro and company

“The group’s terrific new album, Screen Sounds, applies a diversity of approaches to all kinds of source material, consistently retaining the essence of the original works while boldly imprinting the trio’s personality.” — Chicago Reader

“There are always new wrinkles to be found in the familiar.  That’s a political stance that seems to serve the Joe Policastro Trio well…putting alternately gritty and focused touches on songs we’ve come to love….Policastro and company have found their niche tapping into different breeds of treasured songs.” — All About Jazz

The Joe Policastro Trio is a Chicago-based jazz trio led by bassist Joe Policastro featuring guitarist Dave Miller and drummer Mikel Avery. While firmly rooted in jazz, the band’s open-minded, inclusive nature also brings rock, soul, funk, Brazilian, and free jazz to the surface while keeping the aesthetic of an acoustic jazz trio intact. Their third album, Screen Sounds (JeruJazz Records), is an assemblage of movie/TV music re-imagined by the trio. Other releases by the band include 2013’s West Side Story Suite For Jazz Trio, and 2016’s POPS!, also on JeruJazz Records.

Bands are a rarity in jazz these days, especially ones who hone their craft as consistently as this one does. Their last album, POPS! (2016), was a collection of the trio’s re-workings of “pop” tunes, and a nod to Pops For Champagne, the famed Chicago nightclub where the trio continues its long-running, three-nights-a-week residency. Beyond Chicago, the band has been extensively playing together on the road having completed several tours even performing for President Barack Obama in October of 2016.

Known for its eclectic taste and approach, the Joe Policastro Trio “makes the case that such musical hybridity is worth celebrating.” “Policastro…is a melody-minded bassist who prioritizes group cohesion over individual displays of virtuosity.” (Brian Zimmerman, Downbeat)

The Joe Policastro Trio is a band that can turn “pop tart into Jazz art” (Travis Rogers, Jazz Owl) and one that “should have wide appeal among both jazz fans and listeners of other genres.” (Hrayr Attarian, Chicago Jazz Magazine)

Screen Sounds features the singular approach of the Chicago-based jazz trio on a unique assemblage of music from movies and TV.  The album features music from films such as Yojimbo, The Godfather, Blade Runner, Midnight Cowboy, and TV shows such as Taxi, The Young and the Restless, and Twin Peaks.  Both a musical tapestry and personal soundtrack, the trio has re-purposed these selections blending each member’s unique voice into a unified sound while shedding new light on these musical touchstones.

Chicago bassist JOE POLICASTRO grew up in the fertile jazz, classical, and popular music scene of Cincinnati, OH. After performing and recording in Germany, he relocated to Chicago where he quickly established himself an in-demand bassist and arranger/composer. He has performed and recorded with a wide array of artists such as Diane Schuur, Jeff Hamilton, Howard Levy, Phil Woods, Pat and Debby Boone, Tim Ries, Ira Sullivan, Howard Alden, Rick Margitza, Jim Snidero, David “Fathead” Newman, and Billy Hart. Also active as a composer and arranger, his work can be heard on recordings by numerous artists including Ira Sullivan and the Rob Parton Big Band. He leads and co-leads the Gerry Mulligan tribute ensembles, Jeru, and the Mulligan Mosaics Big Band, both for which he has extensively written and arranged. As an educator, he has been a Ravinia Jazz Mentor, a Lecturer of Jazz Studies at DePaul University, a bass instructor at Morton College and the Chicago Academy for the Arts, and he is currently a jazz director at the Midwest Young Artists Conservatory.

Chicago-based interdisciplinary artist MIKEL PATRICK AVERY has been active within the Chicago art scene since moving to the area in 2006. Established as a jazz drummer, he is commonly recognized for his orchestral and melodic style of drumming that often involves the use of unconventional “non-musical” objects. Mikel is also a dedicated composer, photographer, producer and educator. Associated acts include Rob Mazurek’s Moon Cycles, Joshua Abrams’s Natural Information Society, The Chicago Jazz Philharmonic, and Theaster Gates’s Black Monks of Mississippi. He also leads several of his own projects including 1/2 Size Piano Trio, Mikel Patrick Avery *PLAY*, and a new conceptual dance company co-led with artist Amanda Avery called The Something Beautiful Movement Orchestra. Mikel has performed at the Pritzker Pavilion at Millennium Park, the Museum of Contemporary Art (Los Angeles), Documenta 13 (in Kassel Germany), Kepler Studio (Berlin), Guelph Jazz Festival, White Cube (London), MCA Chicago, and he has given two performances for President Barack Obama.

Combining major stints in both New York City and Chicago and numerous tours abroad, DAVE MILLER has cultivated a truly unique, exciting, and inviting approach to songwriting, jazz improvisation, and the guitar. After releasing three albums to wide acclaim with his experimental rock band, Algernon (Cuneiform Records), Miller once again redefined his parameters for his latest album under his name (“Old Door Phantoms”, ears&eyes Records), this time taking cues from early American folk music. All the while, he has maintained a role in many collaborative bands such as noisy avant garde-ists, blink. (Thirsty Ear Recordings) and has served as a consummate sideman to such luminaries as jazz songwriter, Patricia Barber, and Brazilian composer, Clarice Assad. Grammy winning music journalist, Neil Tesser, cites Miller “among my favorite modern guitarists” (chicagomusic.org). The broad-minded musician’s “impressive flexibility” can range “from carefully structured improvisations to complementary texture and color” (Peter Margasak, Chicago Reader) while still “making a listener feel inches from the guitar” (Mark Keresman, New York City Jazz Record).