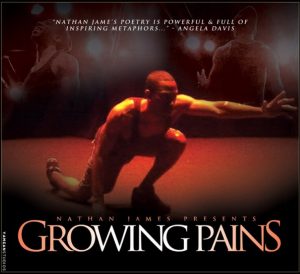 he August Wilson Center and Pittsburgh Cultural Trust present Growing Pains, a powerful solo performance by actor/poet/playwright Nathan James. A proud Pittsburgh native, Mr. James returns to the place of his youth where his personal experiences growing up surrounded by gang violence, poverty and the drug trade serve as the backdrop for this one-hour theatrical tapestry of monologue, poetry, multimedia imagery and movement.

he August Wilson Center and Pittsburgh Cultural Trust present Growing Pains, a powerful solo performance by actor/poet/playwright Nathan James. A proud Pittsburgh native, Mr. James returns to the place of his youth where his personal experiences growing up surrounded by gang violence, poverty and the drug trade serve as the backdrop for this one-hour theatrical tapestry of monologue, poetry, multimedia imagery and movement.

“We are thrilled to welcome back Nathan James to the August Wilson Center and to present the Pittsburgh premiere of Growing Pains,” said Janis Burley Wilson, who recently took the helm as the Center’s president and CEO this fall. “The work of Nathan James comes from the rich legacy of black contemporary theater that August Wilson shaped in Pittsburgh and exported to the stages of New York City. In this tradition, Nathan gives audiences a first-hand, close-up look with poetic storytelling that obliterates one-dimensional stereotypes about black culture.”

“Growing Pains explores how we end up where we are in life based on our personal experiences. It examines the influence of media and upbringing over the way we view politics, beauty, each other, and most importantly ourselves,” describes Mr. James. “It taps into the part of the human spirit that enables us to empathize with one another as individuals, even if we can’t always relate to each other’s life experiences.”

Growing up in Pittsburgh in the 1990’s, Mr. James often found himself living in two completely different worlds.  On one end, he grew up in a neighborhood heavily embroiled in poverty, drug activity, and gang violence.  On the other end, he was fortunate enough to have parents who scraped together what little money they had to enroll him in acting classes and conservatories to distract him from the allure of street life.  This theatrical education gave him a unique opportunity to observe and learn from two different ways of life, neve completely fitting in to either environment because of his affiliation with the other. He wasn’t “Hood” enough to be completely “Hood” because of his interest in the arts, yet he was too much of a product of his upbringing to be completely accepted among the “Privileged” in his acting classes. The stories, personalities and experiences of his youth culminate in this special Pittsburgh premiere.

NATHAN JAMES is a proud native of Pittsburgh, PA, where he began his career with Kuntu Repertory Theater. As the Pittsburgh Courier described, “Nathan James’ poetry skillfully crushes stereotypes that plague the African American community, as well as satirize the materialist and wasteful opulence that grips American society.”

Most recently he starred in the Off Broadway hit Black Angels Over Tuskegee at St. Luke’s Theatre and he just finished up shooting for a feature film, Service to Man. Other theatrical credits include Julius Caesar at the Pennsylvania Centre Stage, August Strindberg’s Easter at the Gene Frankel Theater. He also performed his acclaimed One Man Show, Growing Pains, on Theatre Row at The United Solo Theatre festival. Prior to Growing Pains, he was seen in the Off-Broadway production, Playing with Fire, with The Negro Ensemble Company and The August Strindberg Repertory Theatre for which he and his cast has been nominated for an AUDELCO Award 2012 for “Best Performance by an Ensemble.” He received an A.U.D.E.L.C.O Award for Best Supporting Actor 2014 for his portrayal as CASE in MAID’S DOOR with the Billie Holiday Theater.

Notable Film Credits include Service to Man, Pain Within, An American Dream, The Temptations, and his television credits include The Interestings, Person of Interest, Shades of Blue, Vinyl, Blue Bloods and The Wire. He studied Voice and Dramatic Literature in London with voice coach Charmaigne Hoare; as well as Acting for the Camera in Toronto, Ontario at the Pro Actors Lab with David Rotenberg.

As a playwright, Nathan is a recent recipient of the August Wilson Playwriting fellowship from the August Wilson Cultural Center, and his play Contrary to Popular Belief was featured in the Reader’s Theater at the National Black Theater Festival 2009, The Standardized reading series at Center Stage NY, and in the Cultural Conversations Festival 2009 at Penn State University. He has been ranked as one of the top 15 poets in the Nation by Poetry Slam Incorporated, and he has performed his Langston Hughes inspired poem I too Sing America 2 on the 2006 Emmy Award-nominated documentary soundtrack Torch Bearers. In the spring of 2014, he won first place at Amateur Night at the Apollo with his original poem Death of Swag.

Tickets are $20 and available by calling 412-456-6666, visiting trustarts.org or the Box Office at Theater Square.